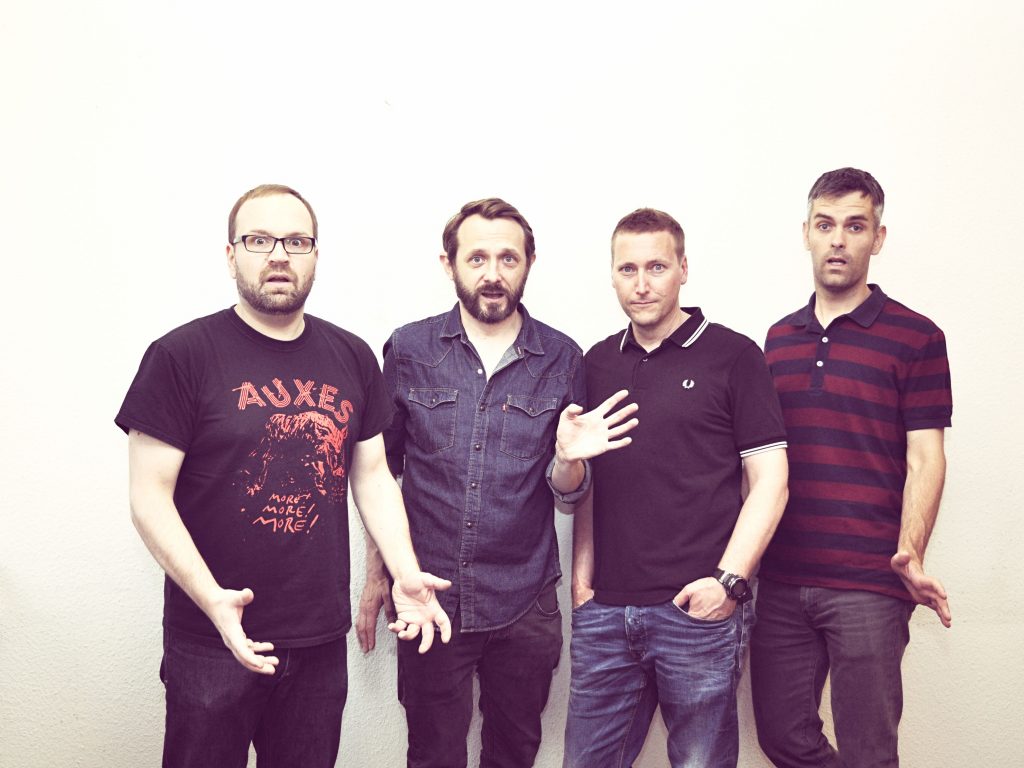 ZESURA is a Post-Punk-Indie-Punk-Rock-Band from Saarbrücken in the southwest of Germany. Even though ZESURA exists only since 2014, you could say that ZESURA was born on the evening Guildo Horn was representing Germany at the Eurovision Song Contest in 1998. The same evening the bands „Karcher“ and „Mental Tearing After 9“ (MTA9) were playing their first show togehter.

Karcher from Saarbrücken were infamous for their Lo-Fi-Noiserock while MTA9 from Neunkirchen / Saar (a town which is probably best known as birth town of Eurovision Song Contest winner Nicole) had already gained some reputation with their noisy hit „Cudercaven“ that had been published on the VISION Magazin Sampler.

Both bands liked each other from the beginning and played several shows together in the following years. Then, families were started, jobs were searched and locations were moved. When both bands finally disbanded, it didn’t take long until some of the remaining members found together.

In mid 2014 Werner Martin (formerly of MTA9) and Ralf Klein-Kretzschmar (formerly of Karcher) decided to play some music together and started looking for a drummer. By recommendation, Alexander Pfingst was found. Alex had been playing with punkrockers „The Pistons“ from Saarlouis and had nearly given up on music when the two convinced him of a comeback.

The newly formed band found a practice room in a former precasting plant and started jamming. In the end of 2014 Dietmar Bottler, the former leadsinger of Karcher was tired of trying alternative hobbies and joined the band too. The band explored the possibilites of the newly formed configuration and new songs quickly emerged .

In April 2016 five songs were recorded by Charles Greywolf (of the successful Metal Band Powerwolf) in his Greywolf-Studios. The songs were published as EP „Post Modem“ via Bandcamp.

In June 2016 the band first appeared on stage, playing with befriended bands, among others the band „Ex-Nerven“ (Fidel Bastro Records). The energetic music and show took their hometown Saarbrücken by surprise. Gigs as support act for „Tomorrows Tulips“ and „Gold Class“ followed.

In 2017 a dream came true for the band members. They were invited to play the main stage at the Nauwieser Viertelfest , an alternative street fest in Saarbrücken. The band also shared stage twice with punkrock-legends „Steakknife“ later that year.

Since the beginning of 2018, ZESURA is proud to be a part of the BARHILL Records Label roster. ZESURA are playing their own, energetic mix of Post-Punk, Punk-Rock and Indie-Rock that definitly will never be heard at the Eurovision Song contest. By their own account, they are influenced by the likes of Hot Snakes, Sonic Youth, Modest Mouse and more recent Bands like Gold Class, Big-Ups or SUUNS.